This bayonet officially adopted by the Wehrmacht from 1934, with the arrival of the Third Reich, has much in common with the M-1884-98 bayonet (2nd type) used from 1915 onwards during the First World War. As for the M-1884-98 (2nd type), the pommel, tang and blade are made in one piece, the cruise is maintained with two carefully abraded rivets. The sheet metal flame arrestor with two holes for waste evacuation fits perfectly the cleaning rod of the weapon.

The flame arrestor originally designed during the First World War so that the shorter barrel of the "Karabiner 98A.Z" would not damage the top of the pads by burning, has not disappeared from the world of manufacture. The Karabiner 98A.Z was still in use at the beginning of the Second World War.

The pommel at the rear left usually bears two Waffemant punches, the number given to the factory inspectors who checked the item to ensure that it met military specifications, if it did, the item was stamped and accepted by the German army.

Some bayonets not used by the Wehrmacht had knobs without any control marks.

The handle has a straight pommel of simplified design, which has a cloverleaf-shaped groove with a split-nut locking knob.

The inserts are usually fastened together with round-headed screws and slotted nuts. Some rare specimens manufactured from 1944 onwards may have the plates fixed together by rivets. Wooden or Bakelite plates were used throughout production, alternating according to the availability of materials. Wooden plates were generally made of European walnut, Bakelite plates can be of various colours from dark chocolate brown to red, with many different shades observed. Some wafers give the appearance that sawdust has been mixed with Bakelite to form a composite material.

For most of the production period, all metal parts of the bayonet had a polished bluish finish. As the war dragged on, manufacturers became less attentive to the finish of their products. Starting in 1944, some manufacturers began to use a phosphate finish.

The blade with a well-proportioned gutter, is generally of bluish polished finish, those manufactured during the years 1944 or 45 are generally of rather rough finish.

Beware of scams : During the Second World War, no saw-toothed bayonet was used, the machining of the blade was done in Belgium for an added value.

The serial number usually consists of 1, 2, 3 or 4 digits and in some cases followed by one or two letters.

Genossenshaft Maschinenfabrik, Ferlach (OMC), then identified from 1941 onwards by the letters bym, in occupied Austria used another complex system to inscribe its serial numbers.

Between 1934 and 1945 several changes were made to the way the manufacturer's no. was inscribed on the blade and scabbard. 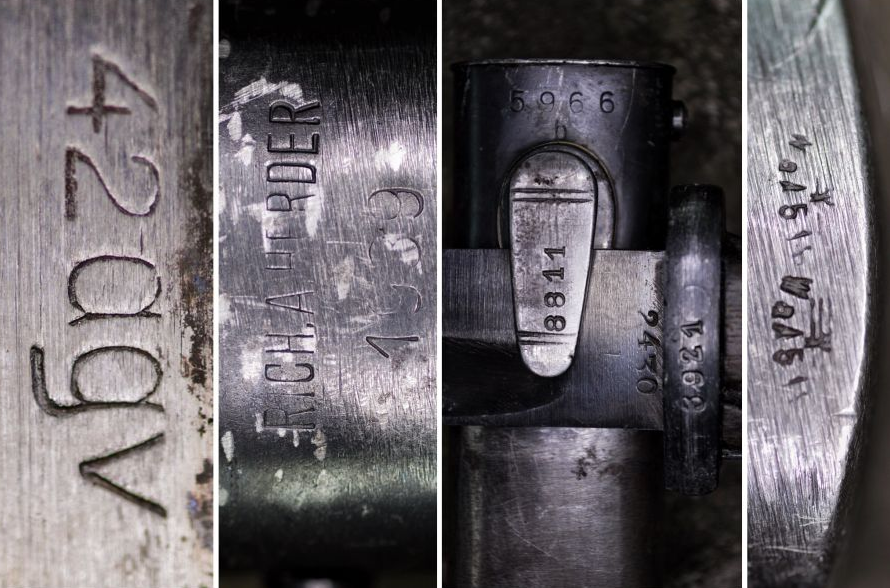 Bayonets and sheaths are coded as follows: year in 2 digits and manufacturer's code in 3 letters.

To summarize, bayonets and sheaths are marked as follows: "prefix letter (N for Nordsee or O Ostsee), preceded by numbers from 1 to 5 sometimes followed by a suffix letter". This means that the standard KM marking was in the form of "N.xxxxx letter" or "O.xxxxx letter". The other markings (manufacturer and serial number) are retained.

Manufacturers of the K98 bayonet

The vast majority of the manufacturers of model 84/98 III were German, former forges in Solingen.
There were also two manufacturers outside Germany: the arms factory of Châtellerault (jwh), in occupied France, and Genossenshaft Maschinenfabrik, Ferlach (OMC) then identified from 1941 by the letters bym, in annexed Austria.
In addition, five German private commercial enterprises produced this model:
- Jos. Corts: the company was founded in 1835 and is still in business today. The full name of the company was "Remscheid, son of Joshua Corts, son of the Remscheid planing mill". In addition to the main product "Knives and power saws for all industrial needs", the company also manufactured blades for hand planers.
-Dürkopp: is a German manufacturer of cars, motorcycles, scooters, bicycles and ball bearings. The company was founded by Nikolaus Dürkopp in 1850 and is located in Bielefeld, in the north-eastern part of North Rhine-Westphalia, in the province of Westphalia-Lippe. Today it only produces sewing machines under the name Dürkopp

-Adler AG. In 2010 it sold its conveyor belt production business to the Austrian Knapp AG.

The pommel, tang and blade are made in one piece, the sheet metal flame arrestor with two waste disposal holes fits the cleaning rod of the weapon perfectly.

The sheaths used for the bayonets of the 3rd type by their shapes are practically identical to those used during the First World War, the screw for holding the bowl is located on the side. From 1941, the striations on the suspension button were removed.

These leather holders, normally intended for motorized troops, can be brown or black in colour. The holding strap attached during manufacture has an aluminium locking button. Four steel or aluminium rivets with washers reinforce the assembly.

From 1944 onwards, in principle, only the nine-digit code appears on the markings without the word Reichsbetriebsnummer or its abbreviations.

The first digit between 0 and 9 designates the business group :

The first four-digit number indicates the geographical region in which the company is located:

The third and fourth digits indicate the localities in the region.
Ex: 0/0560 is Wuppertal and 0/0561 Solingen, two cities which are located side by side 60 kilometres from Cologne. It is interesting to note that this numbering system was applied after the war until 1993, in FRG, for postal codes.

The second four-digit number, assigned individually to each business, in the designated locality.

These leather holders can be brown or black, four rivets in steel, aluminium, or very rarely brass with washers reinforce the assembly. There is also another model identical to this one without central seam.

You can find some M1884-98 III Bayonet in our bayonet selection showing the most interesting bayonets currently available for militaria collectors.

We hope you will have found some useful information in this article.